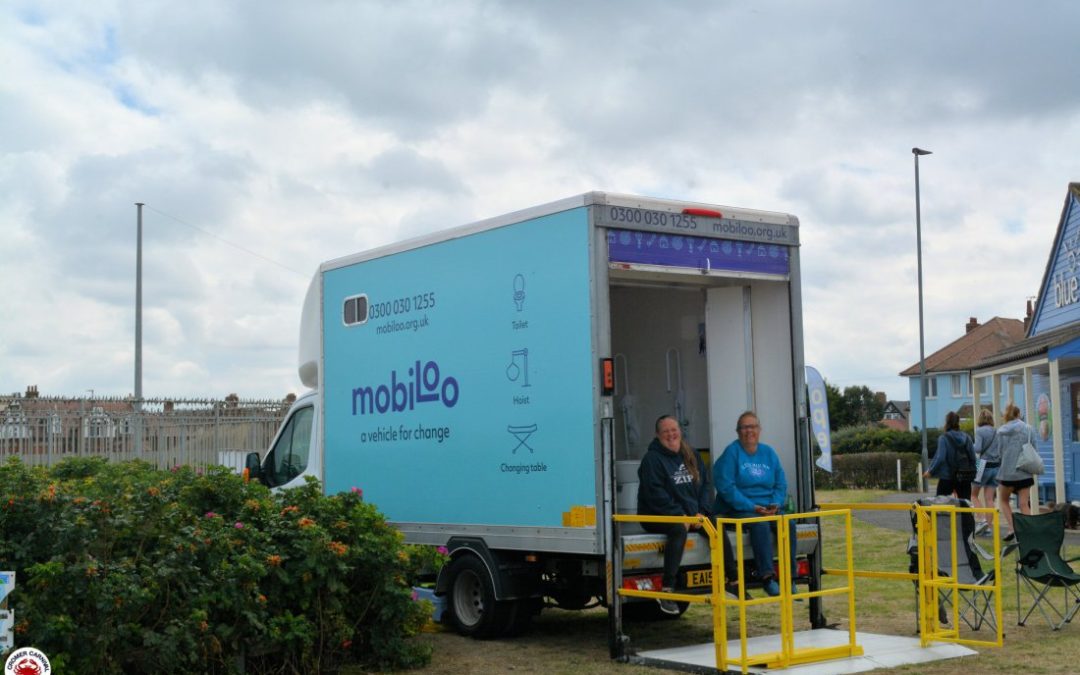 In late 2016 a member of our local carnival committee got in touch to ask if there was a mobile version of a Changing Places that could be used at Cromer Carnival, I got in touch with a friend of mine who told me about Mobiloo, and here is where my association with Mobiloo began.

Mobiloo is a Changing Places on wheels. It has a height adjustable, adult sized changing table, a ceiling hoist, toilet and sink and a tailgate lift to get people into the vehicle.

After much arranging between myself and the Cromer Town Council we decided to have the Mobiloo up the top of Runton Rd car park, just opposite the toilet block. This was so that anyone visiting Cromer that week could use it. It was to be open from 9am-9pm every day. I was lucky to have some awesome helpers that week allowing me to have a meal and more importantly my own toilet breaks, I cannot thank them enough.

We were very lucky to have some awesome sponsors to help with the Mobiloo being at Cromer Carnival 2017. These were Henrys Coffee Shop, The Rock Shop Bistro, Bann Thai, The Copy Shop, Morrisons, Masala Twist, Cromer and Sheringham Rotary Club, About With Friends and Cromer Academy, great to have so many businesses caring about access and inclusion in Cromer, it makes me so proud.

That week I met some amazing people, people who could see the benefit of having Mobiloo at the carnival, foster carers, social workers, teachers of SEN (Special Educational Needs), even a gentleman whose wife had to take their son home halfway through the week due to not having these kind of toilets available and of course all the users and their carers. I decided to have a ‘guestbook and below are just some of the comments we received:

‘Used Mobiloo today, brill, should be more of them, so needed’
Followed by
‘What an amazing toilet ‘At Last’. ****** who is 22 years old and this toilet gave her dignity in going to the toilet, I have been a carer for 15 years and this is just amazing. Well done to all who were involved to provide this much-needed facility’
There were so many more comments along these lines but this last one is quite special and I shall tell you why afterwards,
‘Great facility for such a lovely week here in Cromer. However, every town should have a permanent ‘Changing room’, I also think, in my opinion, it should be provided by the council, NNDC take note. Thank you, Emma and I will help get a permanent changing room anyway I can’

I had a conversation with the Mum of the lady who runs a local support group for adults with various learning disabilities and this was her comment. this was where The Honeypot in Cromer started from. The Honeypot is a cafe that has a smaller version of a Changing Places on site, it provides a changing table, hoist and a snazzy wash and dry toilet. It means that Cromer is now a lot more accessible to the people who need these facilities, it fact it was recently mentioned in another blog of someone who was able to bring her family here for the first time (More about The Honeypot in another blog to come soon).

I digress, well as you can tell having the Mobiloo at the 2017 carnival was a huge success so much so it has visited Cromer another 4 times since including the Cromer Carnival 2018 and will be here in the 1st December 2018 for the Christmas light switch on and again on the 1st January for the New Years firework display, and all funded by Cromer Town Council who should be commended for jumping on board with the Mobiloo.

Another exciting step with the Mobiloo in 2018 was that after conversations between myself and the National Trust Equality officer we had the Mobiloo on the first Tuesday of each month from May to September at Blickling Hall meaning that we spent hours somewhere we had never been to before as a family knowing it was available should we need it, and also that I spent more money that I probably should have ;). As this was another success there has been confirmation from the NT Equality Officer that Mobiloo will be back again in 2019 and not only that Mobiloo will be attending NT Felbrigg Hall for four dates. And, Mobiloo attended the popular Repton Revealed at NT Sheringham Park. Luther at Blickling Hall

Mobiloo will be attending the Thursford Christmas Spectacular for two dates and attended the Spring Fling at the Norfolk Showground and the Royal Norfolk Show in 2018 and have been confirmed again for 2019. For these dates and any others please see our Events page.